Yep, the hottest team around is your St. Louis Cardinals! The weakened Cubs were pushed to the side, and now it’s time to move on to play the Boston Red Sox and San Francisco Giants, two teams that have certainly had the Cardinals number in post-season play this century, and especially this decade. Well, it’s payback time (somewhat) as both teams roll into Busch Stadium this week for five games (2 against Boston, 3 against San Francisco). Make sure you Post Up with the best team going in baseball at the best sports bar going in St. Louis, The Post Sports Bar & Grill! We’ll have our 22 oz well & draft special, free shots for Randal Grichuk taters, and 10% off regular prices just for sporting Cardinals gear! Come during any of their Tuesday or Friday games, and we’ll be giving away tickets live, in-house, ‘cuz that’s what we’ve been doing for years! We buy season tickets to give away to our fans twice a frickin’ week! So come revel in the Redbirds firstplaceness, at the neighborhood fan cave that has taken first place on so many lists, The Post Sports Bar & Grill! 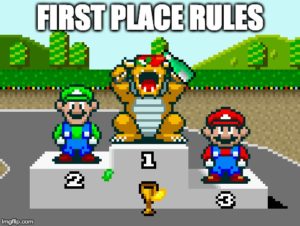