Hello fellow Posters, the best Sports Bar in St.Louis (and best Fantasy Sports Bar in the country per Razzball radio) is rev-ing up for another Fantasy Season.  That means its time to start scheduling Superdraft Season VII. 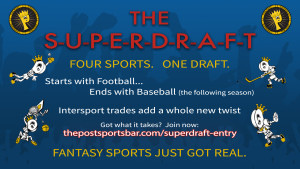 Superdraft Recap:  Is an all encompassing 4 sport draft that the owners of The Post Sports Bar & Grill created.  The draft typically takes about 8 hours and you’re constructing your fantasy football, basketball, hockey, and baseball leagues all at once.  Therefore the same 12 teams are in the same 4 leagues together.  The goal of the Superdraft isn’t necessarily to win an individual sport, but instead to accumulate the highest Superdraft point total, which is comprised of your cumulative performance in all 4 sports.
Not many people are fantasy gurus for all 4 sports.  This is the reason that the majority of the 12 teams in our current Superdraft league are co-owned by at least 2 owners, some even have 3 or 4 owners.  This creates an additional dynamic as we consider this the first ever team-oriented fantasy sport.

Intersport Trades:  Arguably the best part about The Superdraft.  The intersport trades happen a lot more often than trades occur in normal fantasy leagues as there isn’t yet a definitive valuation system for players across multiple sports.

Interested participants will receive our official Superdraft rulebook along with Draft boards from the past two years to do some homework.

The Superdraft is just one more reason That The Post Sports Bar & Grill is the best restaurant and bar in St.Louis… so get in on this magical fantasy adventure ASAP!   And we don’t offer baby specials during the fantasy sports season… no… we offer Beer Cooler specials.  $50 for a 20 pack cooler of domestic draft beers.
The Post Sports Bar & Grill
Your Gameday Office.  Stay Posted.